Dark Yellow/Brown
"With this, the Joestar bloodline will finally end. My archenemies, who dared to make an appearance in my destiny... Farewell!" - DIO (ディオ・ブランド)[1]

The World (commonly referred to as "TW") is the Stand of DIO, the main antagonist of Phantom Blood and Stardust Crusaders. The World also appeared briefly in Stone Ocean.

The World is a close-ranged Stand with immense power, incredible speed and precision similiar to Star Platinum. Because it is a close-ranged Stand, it performs poorly in long-ranged fights. However, with its ability to stop the hands of time for 5 seconds make up for it, making it a dangerous Stand to fight. In-game however, it is not as powerful as it is in the series.

You reject your humanity, turning you into a Vampire. But, instead of losing your Stand, your Stand, The World, turns into a much more powerful version than its previous counterpart. You are now capable of regenerating health and also using vampiric abilities.

Has a high chance of failing. There are no differences other than its appearance and rarity.

By reading the paths of the Diary, you ascend your The World into its Over Heaven form.

The World is a tall humanoid Stand with a very muscular build. It bears a striking resemblance to DIO in terms of appearance. It wears a headpiece covering its face to the end of its nose, slanting at a steep angle from the base of its forehead to a peak situated above the rear of its head by about half its height, leaving the face of an inverted triangle visible to the front; somewhat similar to the Red Crown of Lower Egypt.

It wears small, simple twin diving cylinders on its back, connecting via short, twin-ridged cables to the rear of its mask; perhaps secured by thick, ridged or puffed straps running from the rear of its waist over both its shoulders to its front. The back of both its hands bears the shape of a simple clock face. Its chin, the base of its abdomen, its crotch and its knees are topped by heart shapes. Plates on its shins, its footwear bears curved, sharply-pointed toes, similar to those of DIO's outfit in Part 3.

The World can either throw a flurry punches or kicks. It has a 50/50 chance to be a punch or a kick barrage. Each punch/kick deals 5 damage. This has a low cooldown.
"WRRRRYYYYY!" - WRRYYY Punch

The World strikes the target with a heavy punch that deals around 35 damage. This has a low cooldown.
Knife Throw

The user throws one knife in front of them. The knife deals 15 damage and has a low cooldown.
"Feast your eyes on my power!" - Time Stop Donut
Cursor on Target +

The World stops time and punches the target's stomach, and quickly resuming time. This move is instant, giving free damage. The target will be sent where they were facing. This has a high cooldown.
"The World! Stop time!" - Time Stop

The World uses its true power to stop time for 5 seconds. All damage will be stacked until time resumes. This has a high cooldown.
Stand Jump

The World uses its immense strength to leap into a distance with its user. 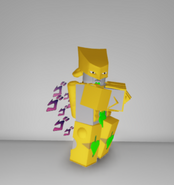 DIO and The World in the anime.

DIO and The World in the colored manga.

Community content is available under CC-BY-SA unless otherwise noted.
Advertisement